[FTC Standard Disclosure] We received no compensation for this post.

This was one of the best yardbirds I’ve cooked in quite a while; it was juicy, well-seasoned, and had a crispy skin.

This isn’t a recipe post, rather just a quick report about what I did, which wasn’t a lot: no dry brining, no injections, no fiddling around with it.

I started with an all-natural 3.5 whole chicken and spatchcocked it using poultry shears to remove the backbone. Since I was using Denny Mike’s Chick Magnet to season the bird, I followed his mantra of “Spray – Sprinkle – Spray.” I patted the bird dry, spritzed it with canola oil, gave it a heavy sprinkling of Chick Magnet, and then hit it again to lock the seasoning down. Funny story about Denny. I first met Denny Mike at the Memphis in May World Championship BBQ Cooking Contest. Robyn “GrillGirl” Lindars introduced me to him as we were cutting across the park, but it was loud, and we were in a hurry. I misunderstood the introduction, and for a couple of years, I referred to him as Mike Denny. It wasn’t until I saw his rubs a few years later that I realized my error.

I used a large Big Green Egg kamado grill for this cook. It wasn’t a strategic choice. I just wanted to use it because I had just replaced the bands on the grill. 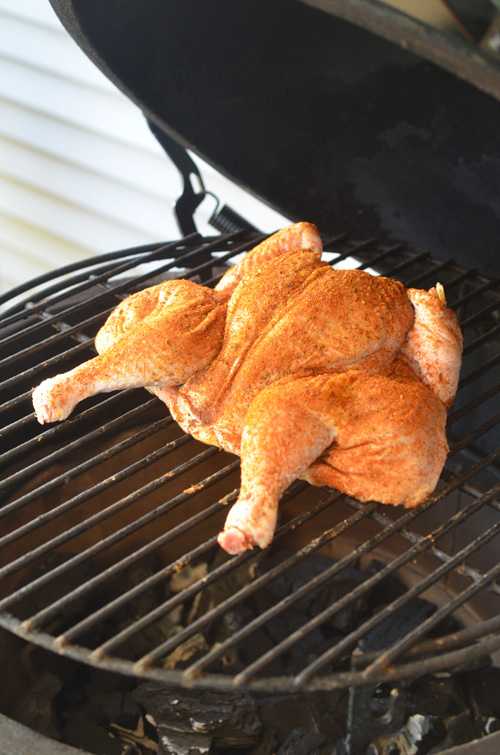 I loaded a Kick Ash Basket full of Tennessee hardwood lump charcoal and fired it up with my JJ George grill torch, my usual MO. I went with a raised-direct set-up at 300°f. This means the chicken was raised higher away from the coals and closer to the heat reflecting off the ceramic dome lid. The beauty of that is you don’t have to flip it at all, and it cooks through, nice and evenly.

There really isn’t much to say. I was out front working in the yard while this cooked for about 90 minutes. The Egg, Chick Magnet, and the bird took care of the rest.

Maybe it was because we were hungry from toiling in the flower beds all day, but this was the best dang chicken I’ve made in a while. The raised-direct method is time-tested and consistently produces crispy, smoky, and tasty chicken. Chick Magnet brought mouthwatering flavor to the party.

I hope you are starting to get beautiful weather and get to spend some time outdoors with your family and friends.

Boxelder Bugs Guide – How To Handle The Infestation

Get in Your Car and Drive to Burnt Bean Co. in Seguin – Texas Monthly

We will be happy to hear your thoughts

The Gardener Reviews is an online store where you can find the best Amazon products and also be inspired with new ideas for your own garden.

We know that it can be hard to find the best products on Amazon that best suit your needs, but we are here to help you.